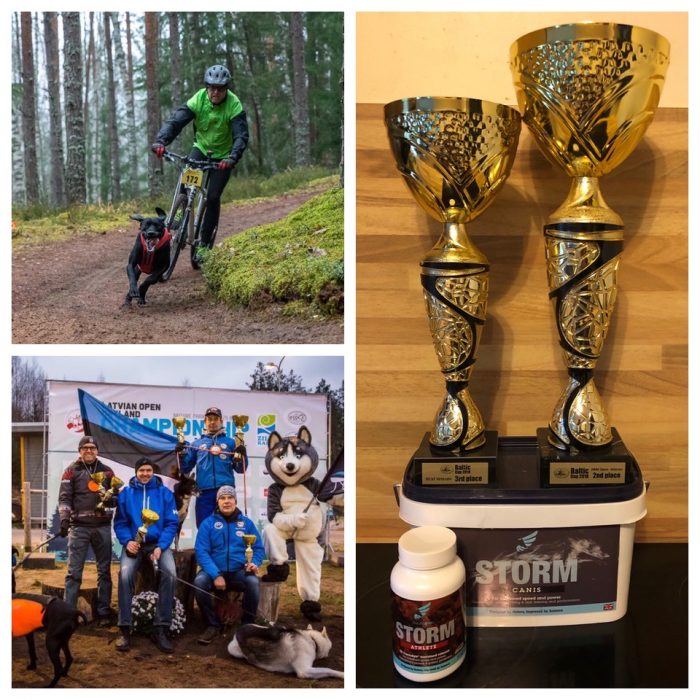 Estonian based UK canicross and bikejor competitor, Lloyd Clark, reached 2nd and 3rd placings in the Baltic Cup with his two German shorthaired pointers, Bear and Elke, and the assistance of STORM® Canis and STORM® Athlete.

The Baltic Cup is a challenge affiliated with the International Federation of Sleddog Sports which runs throughout the year across different European countries. The locations change from year to year and in 2018 events were held in Poland, Latvia, Estonia, Russia and Lithuania. Each dog competed in 12 races across the five countries, with 2nd place for Bear in the bikejor event and 3rd place for Elke in the canicross.

As the previous season came to a close, Lloyd realised he was not far off the top class competitors and so sought out a supplement which would give him a competitive edge whilst ensuring his dogs’ health and wellbeing. After much research, he settled on STORM® Canis.

Following his first competitive season using STORM® Lloyd was extremely pleased with the results and saw a notable increase in the dogs’ stamina, as well as shortened recovery time. He credits STORM® with contributing to his success in the Baltic Cup and a list of other competitive successes, including topping the International Federation of Sleddog Sports in the canicross and bikejor tables in the UK, coming 2nd in the European canicross rankings, 3rd in World canicross rankings and 6th in both the European and World bikejor standings!

Racing Blue is delighted to have supported Lloyd throughout his achievements by aiding both his own training with STORM® Athlete and that of his dogs with STORM® Canis. Both supplements have been specifically formulated to help delay muscle fatigue by increasing the ability of muscle to buffer acidity (H+) from accumulating lactic acid and other biochemical reactions. STORM® specifically increases the level of dipeptide buffers in muscle such as carnosine and anserine. STORM® supplements are suitable for any type of sport where quick acceleration or intense endurance is required, meaning Lloyd and his dogs were able to sustain speed and power for longer.

Additionally, Lloyd mainly competes in ‘veteran’ classes and interestingly as humans age, the natural level of the dipeptide carnosine declines, reducing our capacity for sustained and intense exercise. STORM® Athlete helps to reverse this change and support older athletes.

The Baltic Cup for 2019 is now on the horizon and we’d very much like to congratulate Lloyd on all his achievements so far and wish him, Elke and Bear, the absolute best of luck for continued success in the 2019 events.