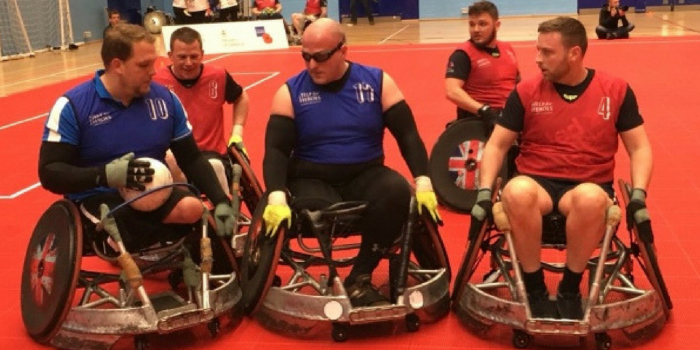 Craig previously played rugby for his regiment and even after losing his right leg below the knee in a tank accident whilst serving in 2000, he continued to play with a prosthesis until a knee injury in 2010 ended his career. With sport having always been central to his life Craig was overjoyed to discover wheelchair rugby whilst watching the 2012 London Paralympics and swiftly secured a spot on the Northampton Saints team. Craig now has the incredible aim of representing his country in wheelchair rugby at the Invictus Games in Sydney, Australia in October this year and is working hard to be selected.

We’re so pleased to be able to support Craig in his ambitions by providing STORM® Athlete. Our supplement helps to delay muscle fatigue by increasing the ability of muscle to control acidity (H+) which occurs as a natural consequence of intense exercise, due to the accumulation of lactic acid in muscle. STORM® Athlete is specifically formulated to deliver a sustained release of beta-alanine, an amino acid critical to the efficient management of muscle acidosis that occurs during intense exercise and has a limiting effect on performance. Essentially, STORM® Athlete will help Craig sustain the power required in his arms for longer.

Currently, Craig is training in a borrowed chair that doesn’t fit him properly and causes him numerous issues whilst playing. To give him the best possible chance of reaching the Games, Craig really needs a custom-made rugby wheelchair. A gofundme page has been set-up to raise money for a rugby wheelchair and we’re really pleased to have been able to help Craig towards his target of £6,000. He’s currently a third of the way to his target and we’d really like to help further by raising awareness of his wonderful ambition.

You can help Craig reach the Games by donating on his gofundme page here…https://www.gofundme.com/bespoke-rugby-wheelchair