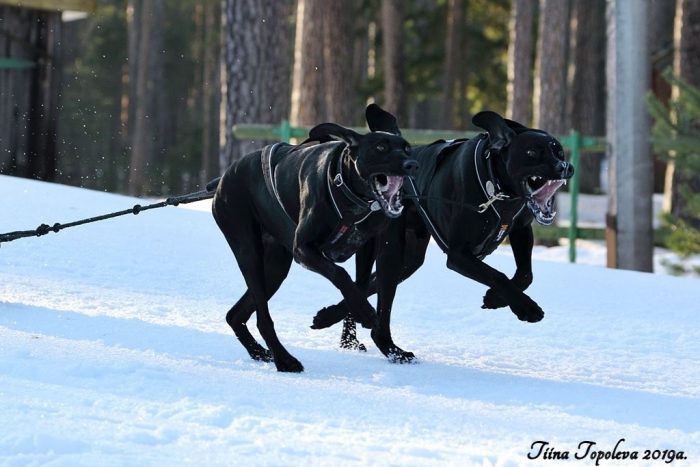 International canicross and bikejor competitor Lloyd Clark has provided a deeper insight on how he and his dogs, Bear and Elke, faired through various gruelling events last season.

To recap, the Baltic Cup is a challenging competition consisting of 12 bikejor races and 12 canicross races across five Baltic countries with two races in Poland, Lithuania, Estonia and Russia and four races in Latvia. Each pair of races is combined to give one result, after which, the best three results are taken in the final calculation. Last year, was the first season in which Bear was competing solely in bikejor and Elke in canicross and at the end of the season, the results were 3rd place for Elke and 2nd place for Bear.

Lloyd and the dogs then moved onto the Baltic Winter Cup. This meant racing on snow for the first time as the UK doesn’t have snow in quite the way that Baltic countries do! Lloyd was not sure what to expect, however, remarkably, they placed a very strong second.

He then set his sights on the 23rd International Sleddog race in Austria, which runs over one weekend with two 6km heats, one on Saturday and one Sunday. On both days, Lloyd and the dogs put in an incredible performance and achievement. On day one, they completed the course in 13 minutes 31 seconds. Which was almost 2 minutes faster than their nearest rival! Incredibly, with a team of two dogs, Lloyd was the fastest team on the course, beating the four and six dog teams and was also quicker than the one and two dog skijorers. The following day, they completed the course in 12.49, knocking 42 seconds off their time the previous day! Once again, Lloyd, Bear and Elke were the fastest on the course with the overall result putting them almost three minutes ahead of their nearest competition. Lloyd reported he felt slightly embarrassed when telling the far more experienced mushers who he’d resoundingly beaten that it was his first season on snow!

Both the dryland races and the winter races are generally organised in this way, with two heats, one on Saturday and the second on Sunday. This means it’s imperative that the dogs are able to recover within 24 hours to compete in the second heat of each race. After feeding STORM® Canis last year, Lloyd found it helps the dogs to recover to 100% of their condition in far less than 24 hours, so incredibly, they’re able to match or improve their course times in the second heat of each race. In training, this allows Lloyd to easily put two sessions into one day which means the dogs are physically far stronger than in previous seasons and effectively doing less work on a race day than on a training day. Furthermore, Lloyd advises that supplementing with STORM® Canis is the only change to the dogs’ daily diet throughout the past two years.

STORM® Canis has been specifically formulated to help delay muscle fatigue by increasing the ability of muscle to buffer acidity (H+) from accumulating lactic acid and other biochemical pathways. STORM® specifically increases the level of dipeptide buffers in muscle such as carnosine and anserine. Our supplement supports training, performance and recovery and is suitable for any type of sport where quick acceleration or intense endurance is required.

We’re thrilled that in feeding STORM® Canis, Lloyd has seen a marked improvement in Bear and Elke’s recovery times, which has further improved their strength and performance. It’s fantastic to play a part in Lloyd, Bear and Elke’s incredible achievements last season and we wish them all the best for continued success in 2019.